The chance purchase of a Schneider Super Angulon 65mm lens started me thinking about panoramic cameras.  The lens covers the 5x4" format so a 6x12cm format on 120 roll film seemed ideal.

I have the use of a CNC drill/router as used in PCB production so I planned the camera around materials which could be cut with it.  I couldn't make every part so some items were taken from defunct cameras such as the film guide rollers and threaded tripod bush which came from a Mamiya C33 and the wind on mechanism which came from a 6x6 folding camera.

I decided to make the camera modular with a removable film gate assembly. This was made from four layers of 9mm thick PVC as shown below: 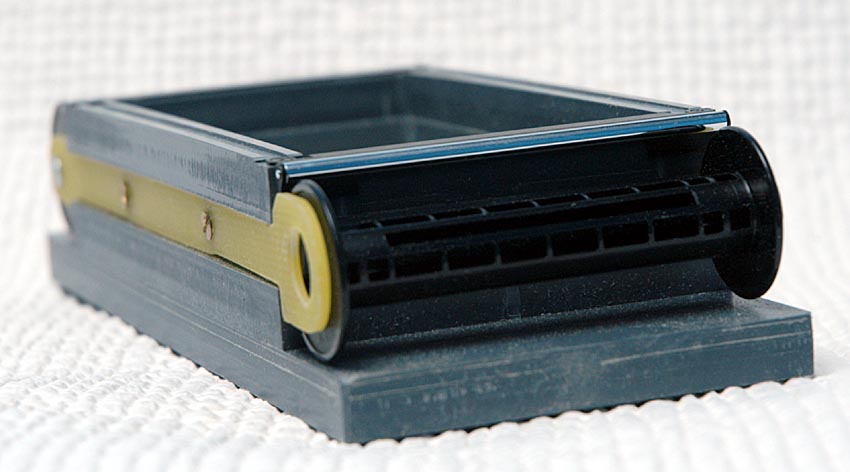 The light green material forming the springs which hold the reels is 1.6mm thick FR4 fibreglass printed circuit board material without the copper.  The Mamiya rollers can be clearly seen.  The large hole at the reel end is for the film winder to engage on the spool.  This needs to retract in order to remove the film holder assembly to change film.  The other three ends of the spools locate in spindles on the springs.

I had originally planned for the lens to be mounted at hyperfocal distance for f16.  It's such a wide angle that there will be plenty of depth of field.  Also the Ł240 price ticket of a new Schneider helical focusing mount put me off somewhat.  After a while I started to look at the focusing mechanisms of 35mm camera lenses and following the advice of an APUG member who had built a wide angle 6x9 camera, I bought a 50mm Olympus lens with a broken aperture mechanism. After stripping it down, I realised that the 42mm diameter rear element group of the Scheider lens would just fit in the 43.5mm diameter helical of the Olympus lens.

The pictures below show the lens mounted on the Olympus helical via another piece of CNC machined 9mm thick piece of PVC.  The helical is mounted on a laminate lens board which can be removed from the camera - possibly to be mounted on a 5x4" body in the future. 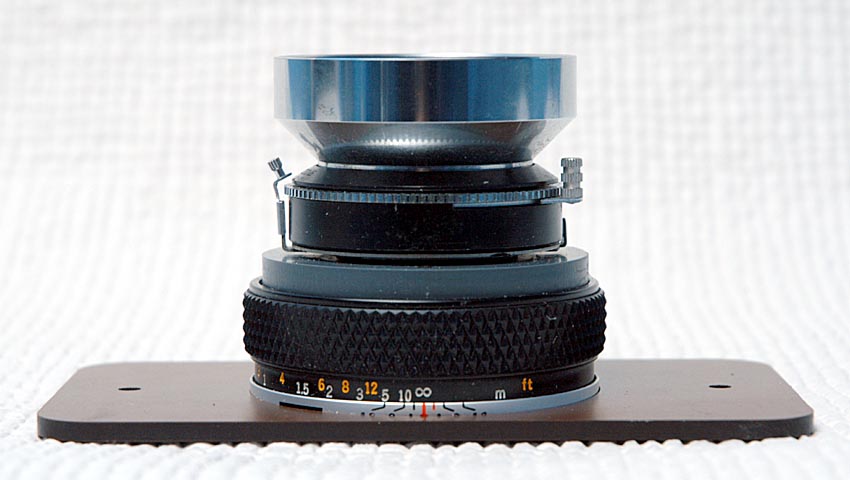 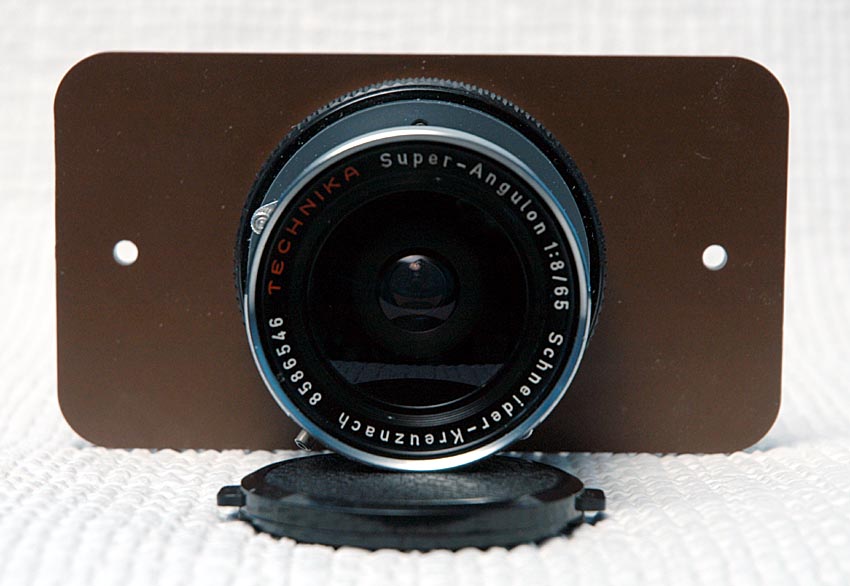 The camera now needed a body to put these parts on.  I had some 3/8" thick pieces of oak which I though would look nice so I set the CNC to work on making some perfectly fitting finger joints which I couldn't do anywhere near as well by hand.

The wind mechanism will be fitted to the top and the tripod thread to the bottom.  The recess on the front is to take the lens board and the two holes are for the mounting screws: 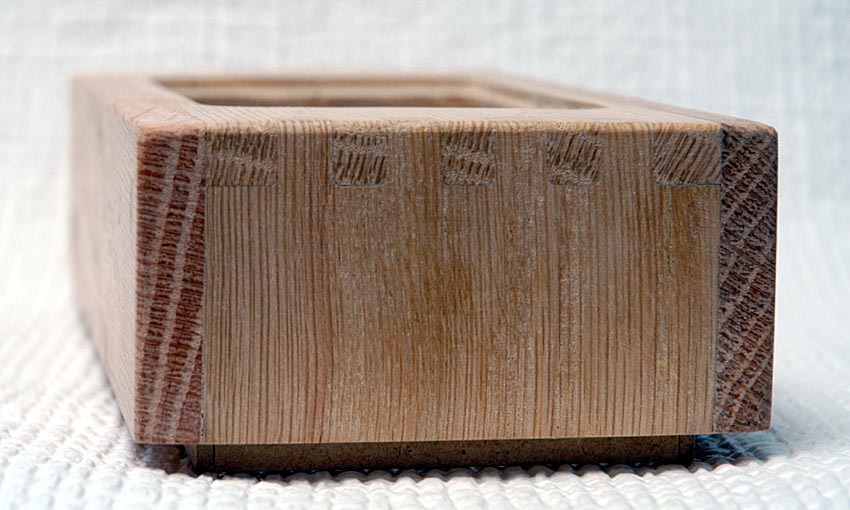 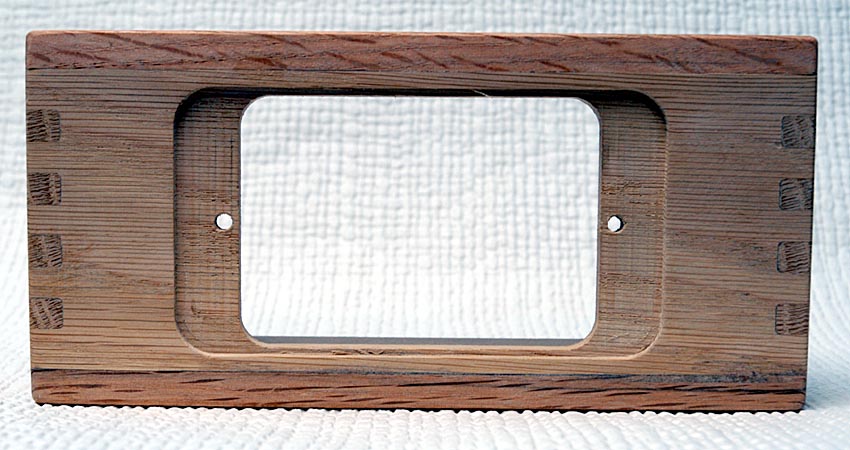 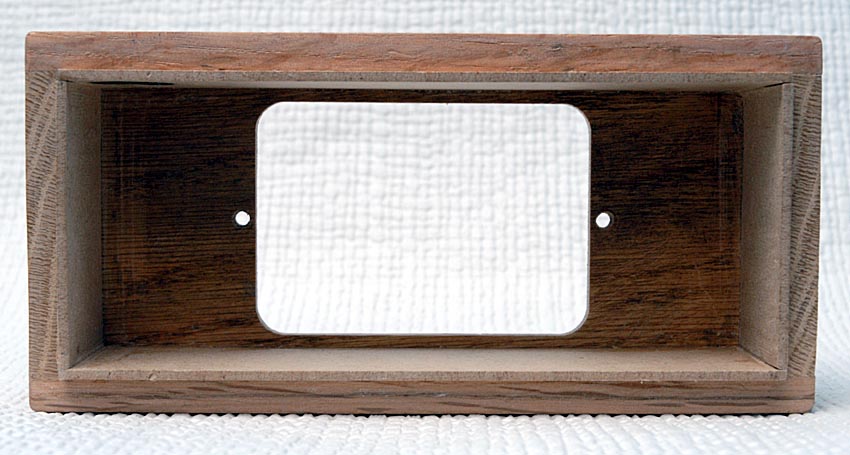 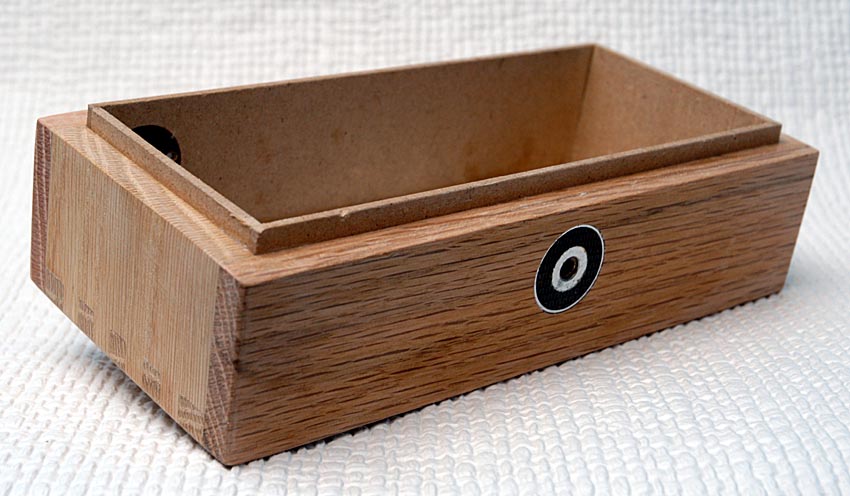 The back with the film insert fitted: 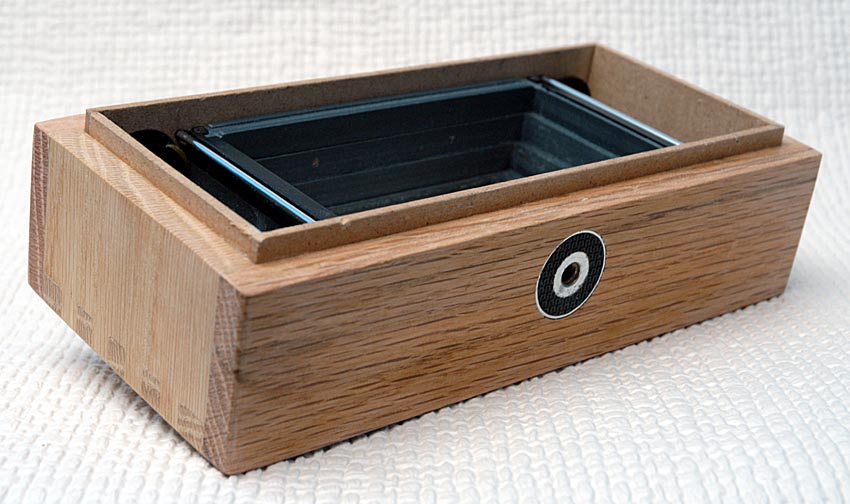 And with the film pressure plate in its approximate position.  The pressure plate was modelled on one taken from the Mamiya C33 but stretched to twice its normal size.  The springs are from the C33: 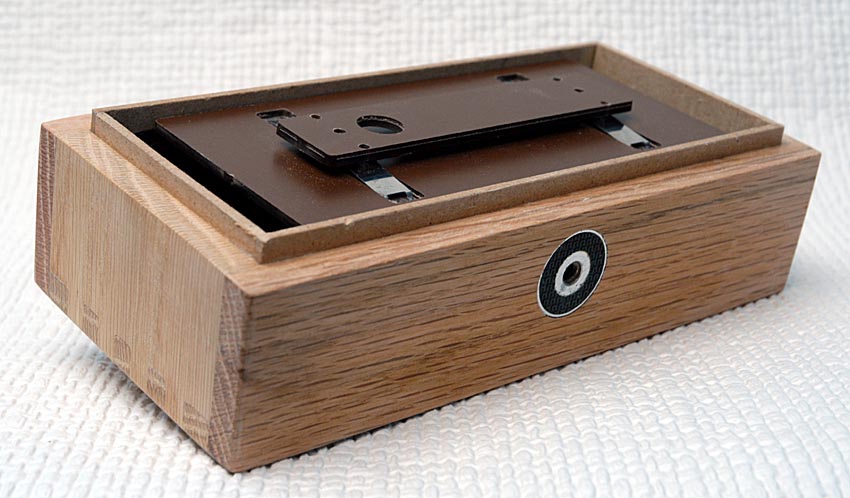 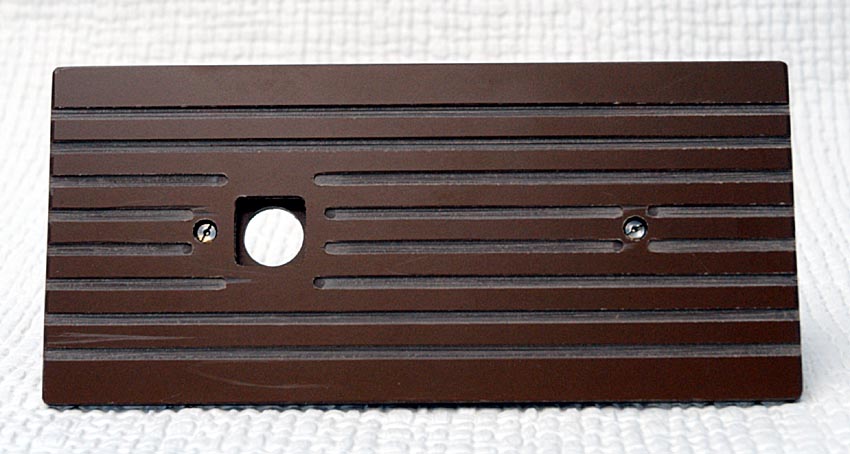 The lens assembly in place on the front of the body with the winder knob in its approximate location: 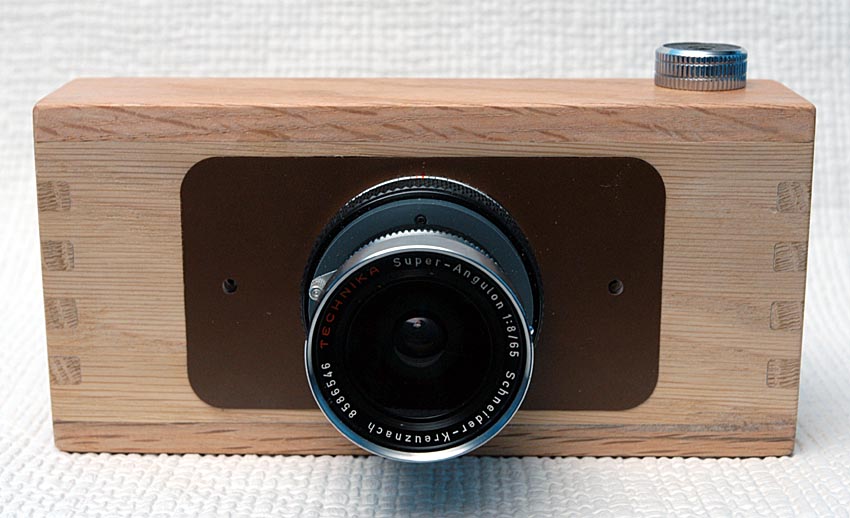 The next item I needed to think about was a viewfinder. The angle of view is similar to a 21mm lens on a 35mm camera (about ninety degrees). Voigtlander make a suitable viewfinder which would work if masked at the top and bottom but as it costs around Ł100 I decided to learn about optics and make my own.  Using a lot of trial and error experimenting with a lot of lens elements from failed lens repairs and other broken lenses, I eventually found a combination of three which would give me the correct field of view and enough coverage to mask it to show the same scene as the film sees.

I made some more PVC pieces to hold it together.  Eventually it will be housed in a tube and mounted to the top of the camera.

This is the view through the viewfinder  (it's actually a lot better than this but this is the best I can do to show it by holding it up to a compact camera's lens with the camera set to macro): 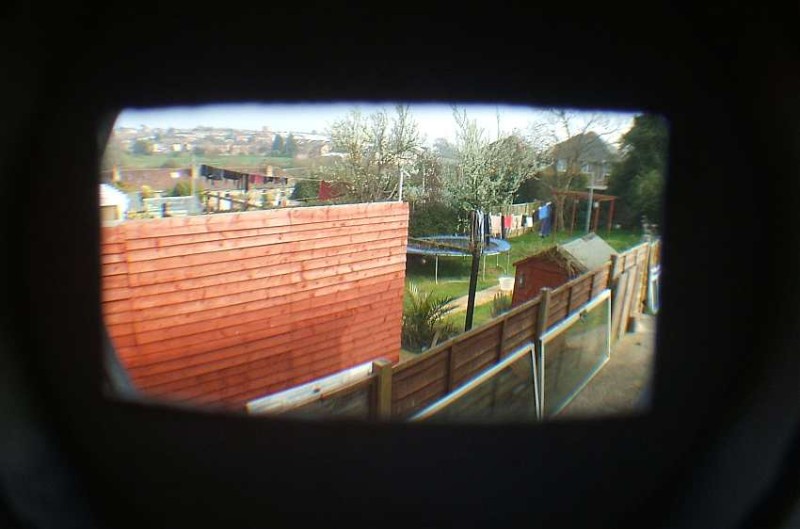 The following picture shows all of the parts except for the back. In the front is the film wind mechanism which fits in the bush mounted in the body.  The two threaded knobs will hold the lens board in place on the front of the body. 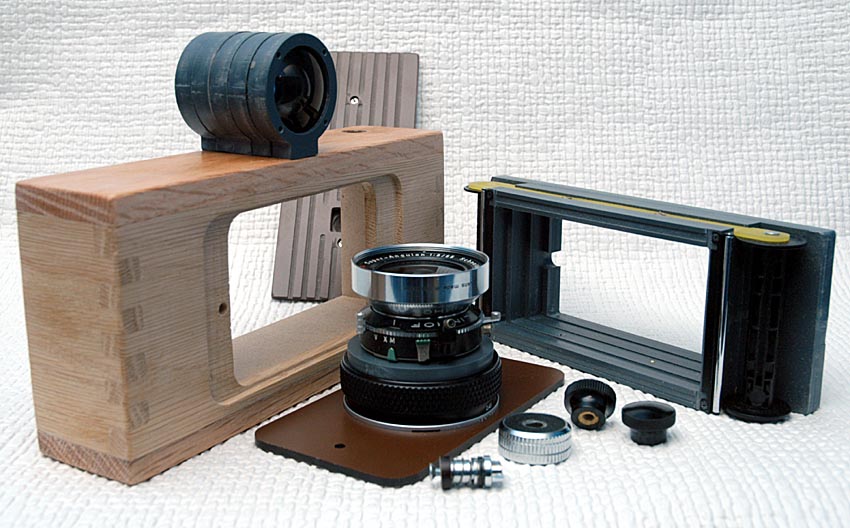 The camera is now complete with a matching oak back: 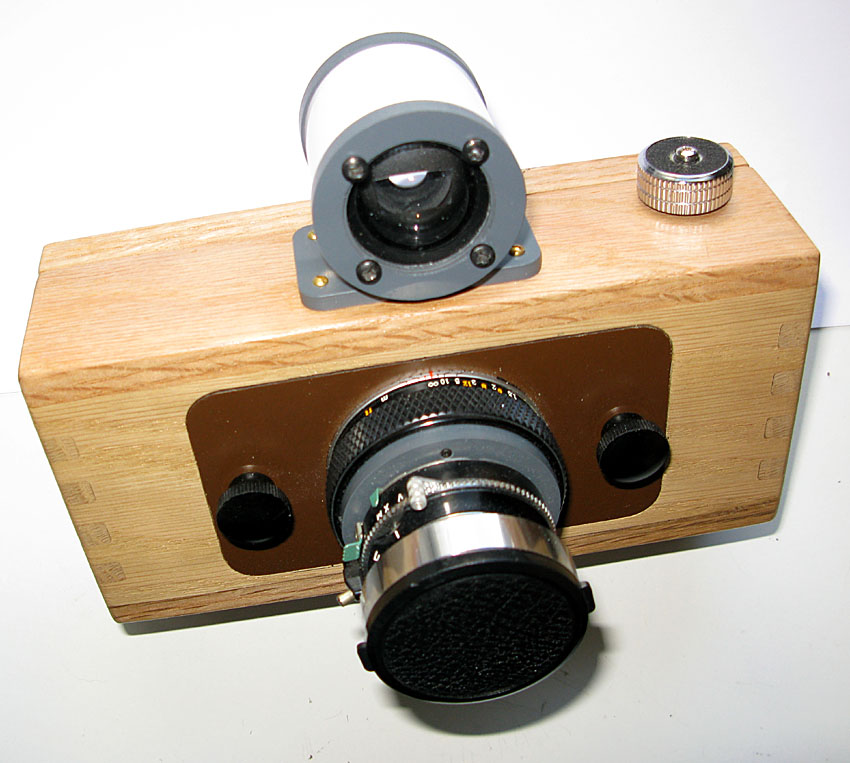 And finally, some results. These from its first Roll of film: